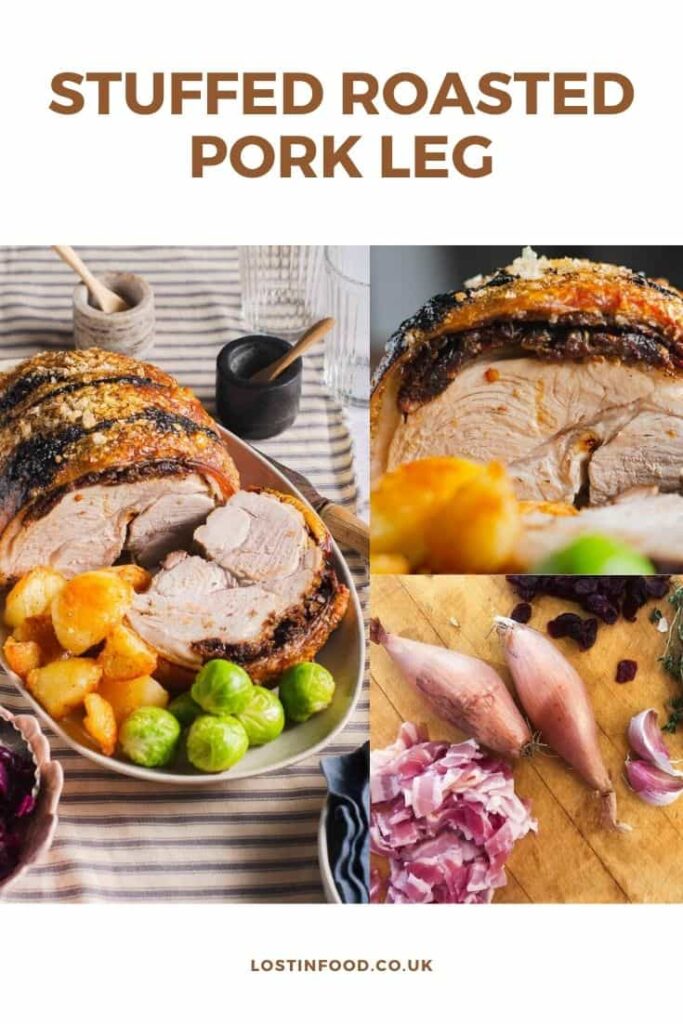 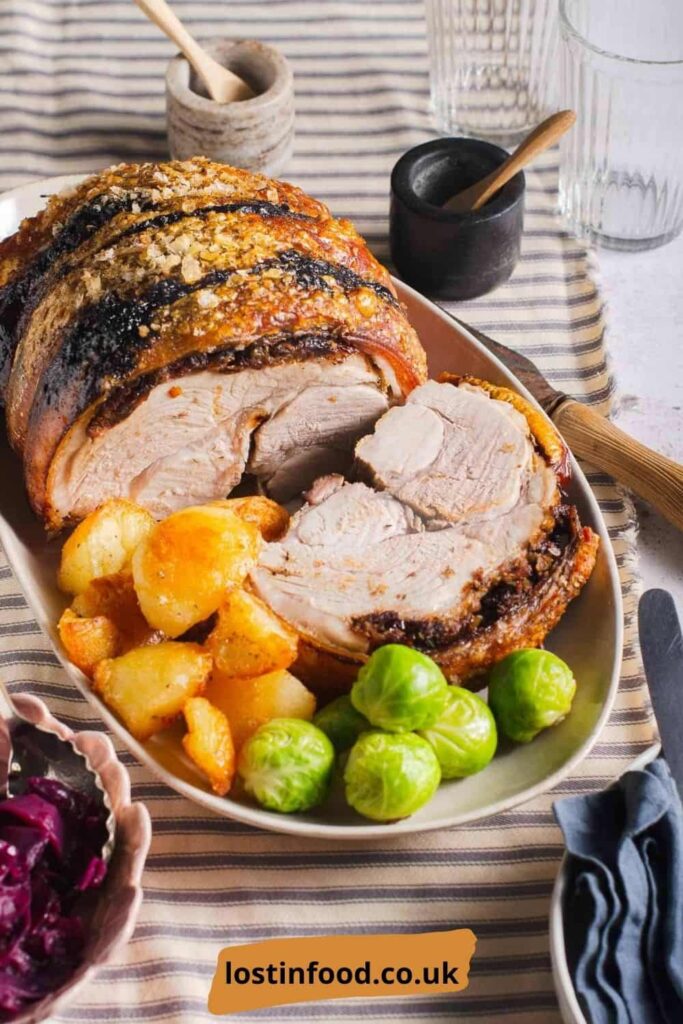 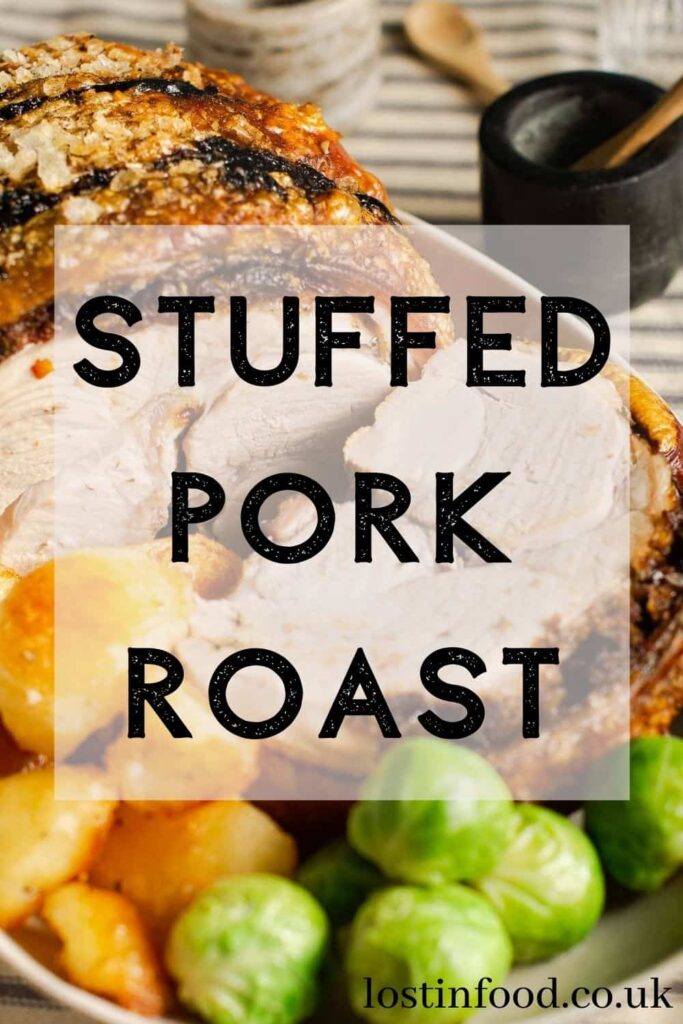 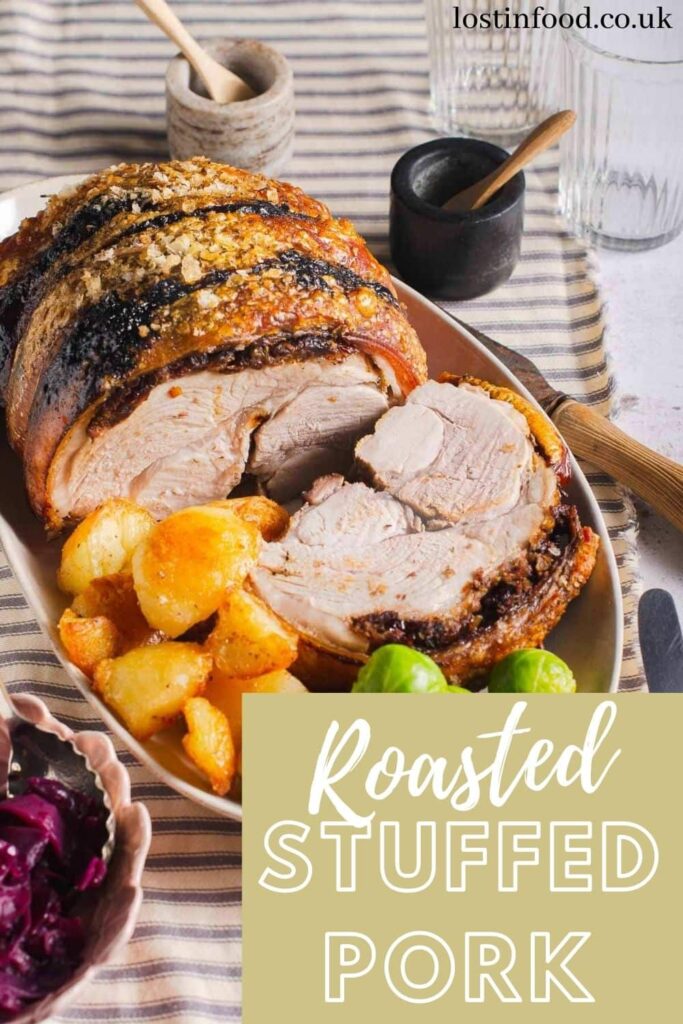 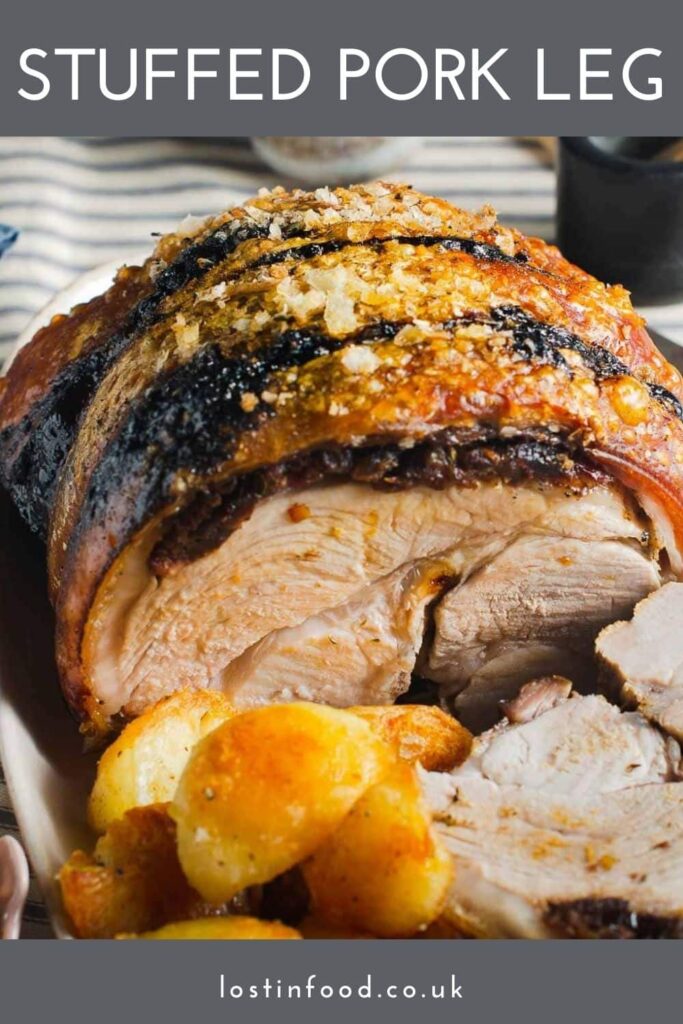 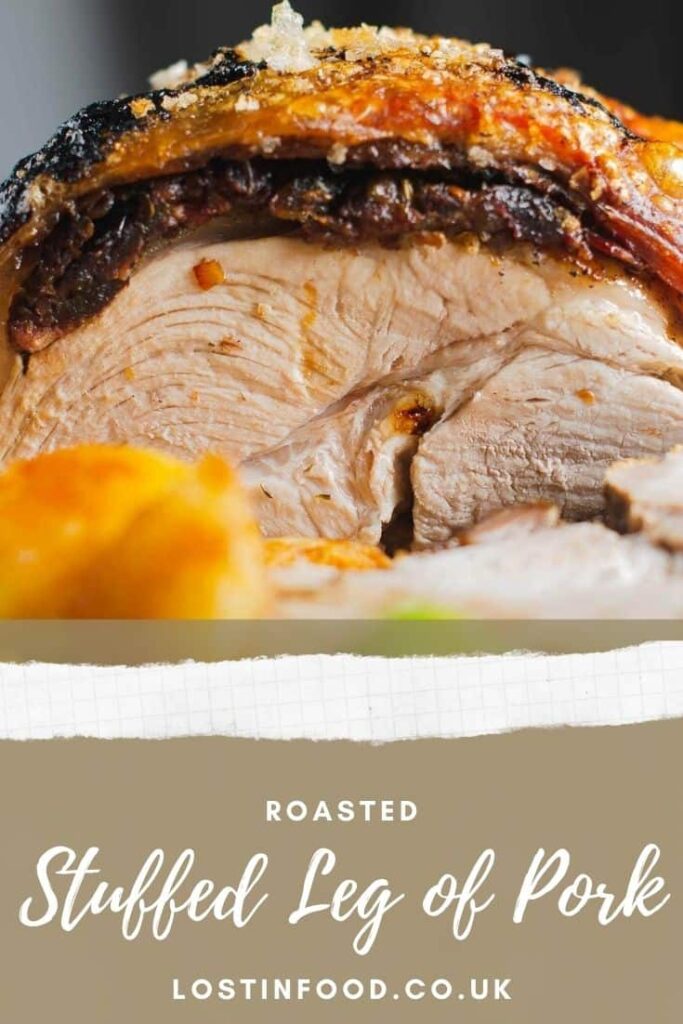 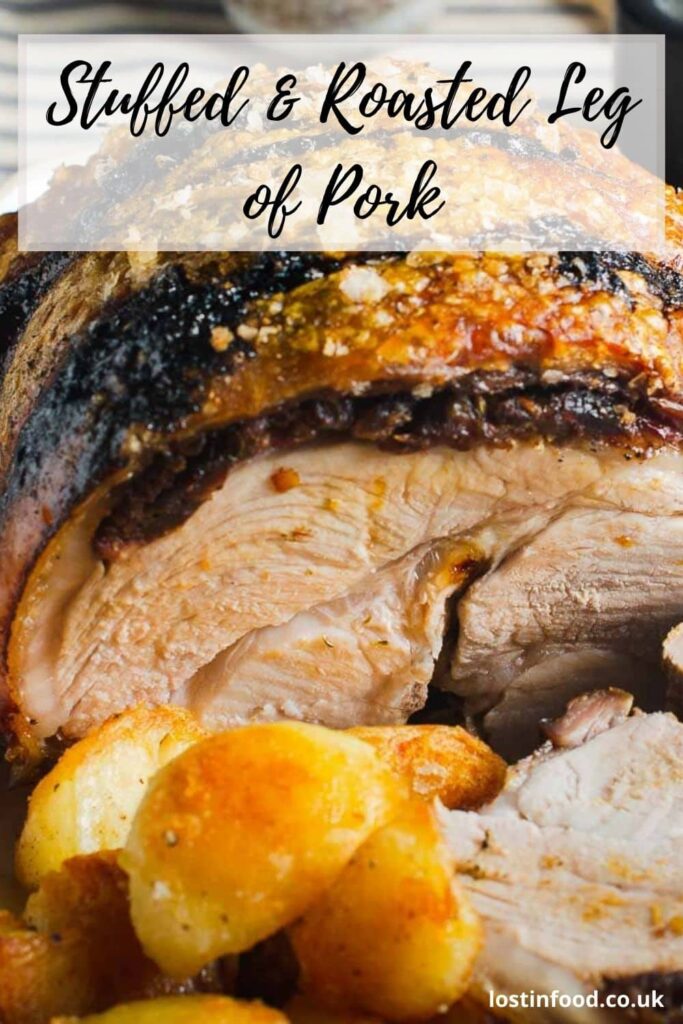 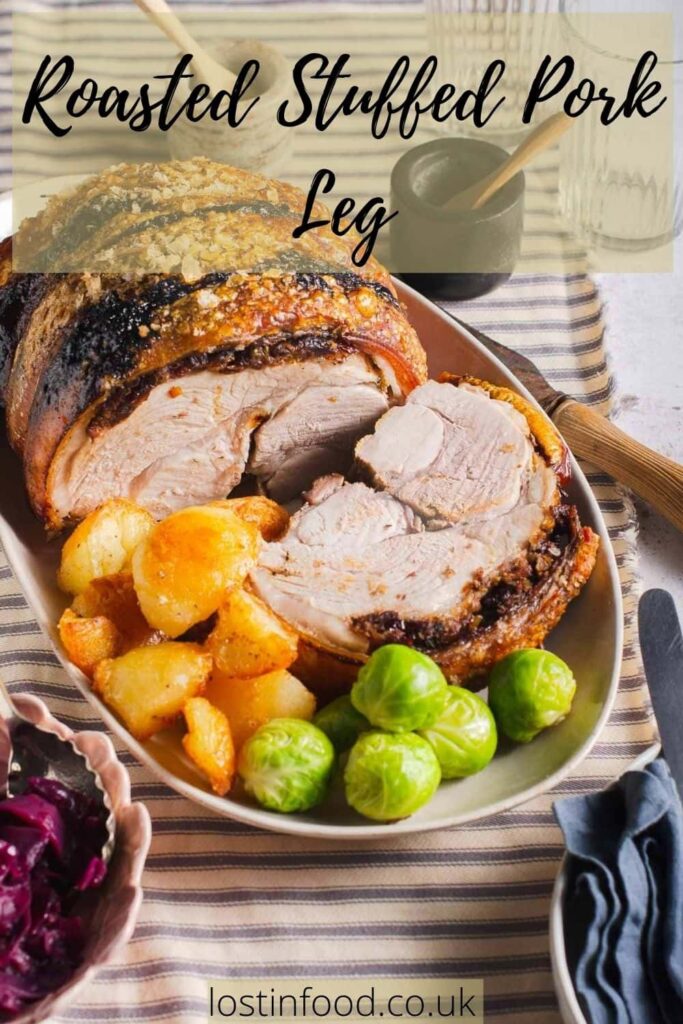 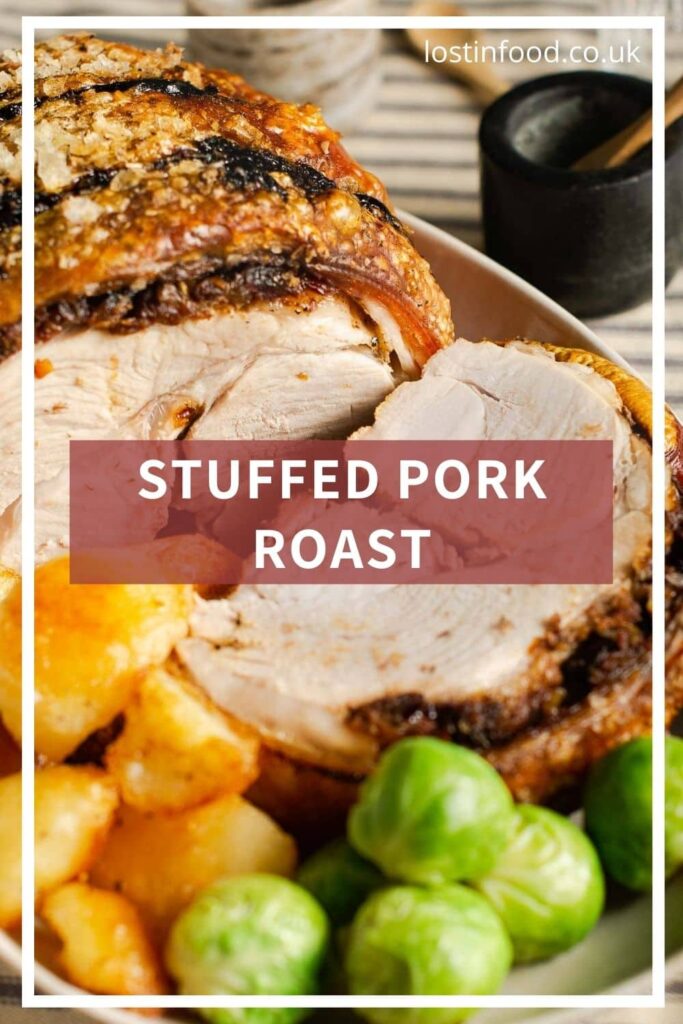 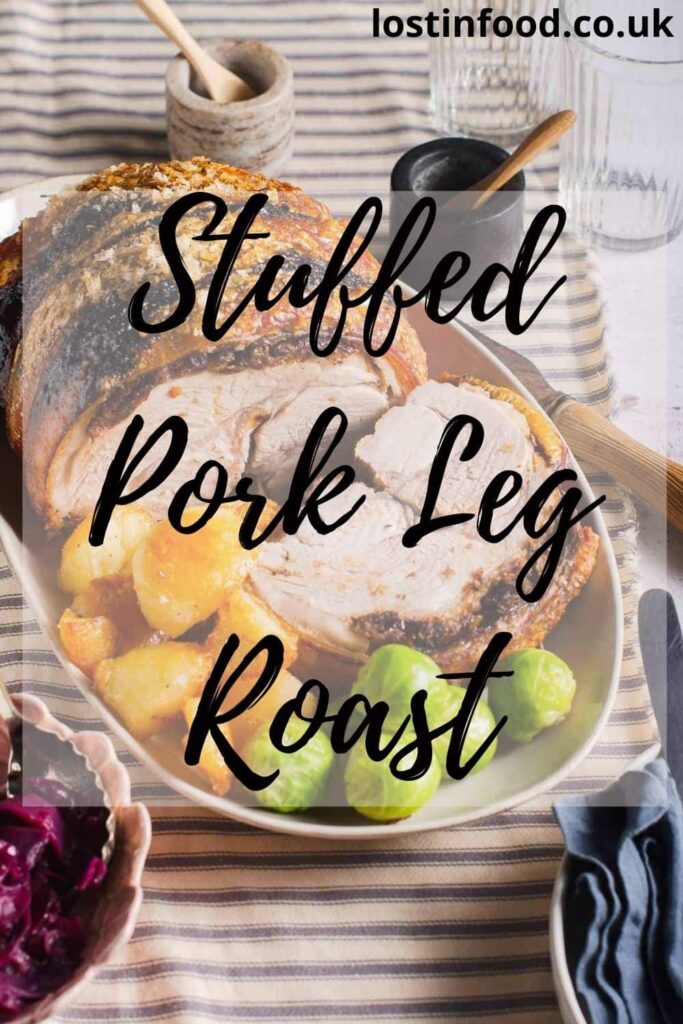 Roast leg of pork with bacon and cranberry stuffing, a fantastic tasting roast that is simple to prepare, a great Sunday lunch dish!

Roast leg of pork is one of my favourite roasting joints. Elevated here with the additional of a bacon and cranberry stuffing, layering just underneath the top layer of fat and sitting directly on top of the meat, flavouring the pork joint beautifully.

I enjoy adding a simple flavours to a roast, but in the case of pork I don’t want anything affecting the crispiness of my crackling.

That’s why I like to place the cranberry stuffing right on top of the meat, under the thick layer of fat and away from the skin!

To flavour the cranberry stuffing, I have used a combination of salty bacon, aromatic thyme and warm spices to balance out the sweet cranberries.

I have broken this recipe down into two sets of steps, the first for preparing the cranberry stuffing for the pork roast. The second step shows how to stuff the pork ready for roasting!

How to stuff the pork leg:

How long does it take to cook boneless leg of pork?

The length of time it takes to cook any joint depends on the size of the joint you are cooking. Put simply, bigger joints take longer to cook!

Leg of pork has a lower fat content that other pork roasting joints which means it can dry out more than other cuts. For this reason it is essential not to over cook the pork it also to allow the roast time to rest.

Preheat the oven to 250C/230CFan and sear the stuffed pork roast for 20 minutes to crisp up the skin.

Then turn the oven down to180C/160CFan and continue to cook, allowing 45 minutes per kilo. So, for this 3kg joint that would be 2 hours 15 minutes.

I like to check the pork after 2 hours, to ensure I don’t over cook it. The joint is cooked when you have an internal temperature of 72-75C.

How to get the best pork crackling?

Crackling is something I love to eat, it’s the prize that all my family love and there always needs to be enough to go round!

To make the best crackling, start by drying the skin of the roast leg of pork, make the incisions in the skin (as described in the recipe steps above) and cover with salt. Then roast the pork as per the recipe card.

Once the joint has finished cooking, turn the oven to grill setting on high, approximately 220C.

Once the grill is hot, place the pork under the grill and allow the crackling to finish crisping up. DO NOT LEAVE UNATTENDED at this point!

This is a crucial step if you want extra crispy crackling and it only takes minutes to ruin. You will see the bubbles start to form on the skin.

When golden brown remove the roast from oven, allow to rest for 20 to 30 minutes before cutting and serving.

Do not cover the meat as you don’t want to allow moisture into the crackling as this will soften it.

How long should you rest pork?

If you want to get the best flavour out of any joint of meat, it is really important to rest the meat. Ideally I would rest this roast leg of pork for 20 to 30 minutes.

By allowing this stuffed pork roast to rest, the juices within the roast settle back into the meat. This results is a moist and tasty roasted meat.

What cuts of pork are the best for stuffing?

Our recipe uses boneless leg of pork which is easily stuffed. However, you can also use other joints of pork!

Pork tenderloin is a simple cut to stuff. Using a sharp knife, cut the fillet out to form a flatter piece of meat. Then place in the stuffing and roll the fillet back up again, securing the stuffing in the middle, and tie.

Point to note: pork tenderloin is a very lean cut of meat and should not be roasted at the same high temperature as other pork joints.

If using this cut, take care not to overcook it. The lack of fat means it can dry out really quickly, so I like to wrap the pork fillet up in some streaky bacon which adds an extra layer of protection.

I like using a French trimmed loin of pork, or pork rack, as I like cooking meat on the bone. However, despite being on the bone, you can still stuff this joint.

Using a very sharp knife make a pocket between the bone and the thick layer of fat and skin. Take care not to cut the whole way down!

Next spoon the stuffing into the pocket, placing it against the meat and bone, tie it up to stop any stuffing falling out and cook!

Should you cover pork when roasting?

I don’t cover pork when I’m roasting it as I want crackling. If you cover the skin it simply won’t crisp up and give you that crunchy crackling top!

Covering the meat does keep the moisture in and stops the roast from drying out, but I tend not to! I combat dryness by cooking it at a slightly lower temperature and always allowing it to rest.

What should I serve with stuffed roast pork?

Roast leg of pork and crackling is a rich joint, so I like to serve it with vegetables that will cut through the richness of the meat. These vegetable side dishes all work really well with roast pork.

If you like this recipe then try some of our other great dinner mains: 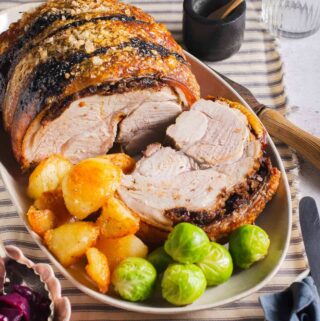 This is the most simple method of stuffing a roast leg of pork and is ideal for novice cooks. However, if you get your butcher to further cut out and flatten the leg, you can unroll the joint and stuff the centre instead before rolling it back up again and securing with string.
Nutrition Facts
Roast Leg of Pork with Bacon & Cranberry Stuffing
Amount Per Serving
Calories 768 Calories from Fat 396
% Daily Value*
Fat 44g68%
Saturated Fat 14g88%
Cholesterol 242mg81%
Sodium 911mg40%
Potassium 1311mg37%
Carbohydrates 11g4%
Fiber 1g4%
Sugar 7g8%
Protein 78g156%
Vitamin A 53IU1%
Vitamin C 2mg2%
Calcium 32mg3%
Iron 2mg11%
* Percent Daily Values are based on a 2000 calorie diet.