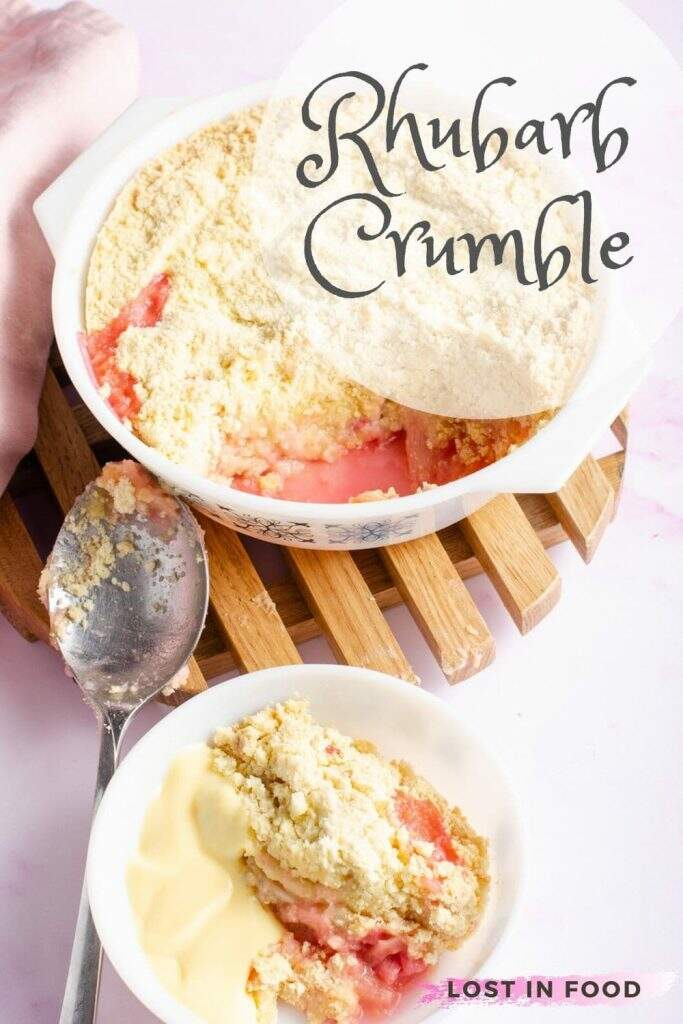 Traditional rhubarb crumble is a proper pudding and one I order any time I see it on a menu. In fact serve me rhubarb in pretty much any form and I’ll be happy.

This is one of those puddings that I don’t like to see messed around with. I just want the rhubarb topped with a simple crumble, no nuts or oats thank you very much.

If you ask my husband, he’ll tell you to double the amount of crumble topping, anything less and he’s likely to call it a “crumble-less crumble”. Whilst I like the crumble topping, I’d argue that too much can leave it tasting a bit raw.

How to serve rhubarb crumble?

As to how to serve it, for me it has to be custard. None of your fancy homemade custard either, Birds or Ambrosia please, I’ll have either!

At a push I’ll have vanilla ice cream or a splash of double cream. My youngest likes hers served with milk, however, I won’t thank you for that!

As soon as I see these glorious pink stems of Yorkshire rhubarb hit our shelves, they are popped into my shopping basket. Rhubarb is one of my favourite foods to eat.

Whilst I’ll happily eat rhubarb is any shape or form, it’s usually a humble crumble that I make first. Simple cooking, and all the better for it.

This recipe is ideal for those who aren’t as confident in the kitchen, but still want to serve up something tasty.

Can I make this rhubarb crumble recipe ahead of time?

When you are ready to bake simply spoon the crumble over the rhubarb, pop into the oven and bake as per the recipe card.

Can I freeze rhubarb crumble?

You can freeze fruit crumble after it has been baked, I just never get to that stage as it’s usually eaten straight out of the oven.  Allow to cool then cover and freeze. It should keep for 3 months.

Just be aware that the rhubarb will break down a little when it defrosts.

Growing your own rhubarb?

For those that grow their own rhubarb, there will always be times when you have too much ready in the garden, and you can’t get through it.

At times where I have a glut of rhubarb I like to freeze some so I can enjoy later on in the year. Some will tell you to first blanch the rhubarb, but this is something I have never done.

To freeze the rhubarb simply wash the stems and cut into chunks. Place on a tea towel to dry then layout individually on a tray and pop into the freezer.

Once frozen, remove the rhubarb from the freezer and place into either a container or bags. When you want to make a crumble the fruit can be used straight from frozen.

Fruit crumbles are such an easy pudding to make and a great way of using up fruit that’s starting to look a little tired.

So throughout the year I like to bake crumbles with other fruits, here are some ideas:

Adding some spice to your crumble?

You can add spice to a crumble and it can really elevate the dish. Add the spice either the fruit base or alternatively mix some through the crumble topping.

It is entirely down to personal choice, you can add spice to both layers if you really want.

If you like this recipe then try some of our other recipes:

If you love rhubarb as much as we do, have a read of our 5 Best Rhubarb Recipes post. 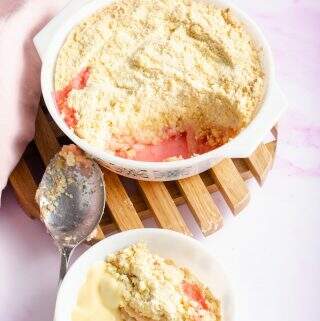