Eve’s Pudding – a proper old fashioned pudding from my childhood and given the abundance of apple trees in our garden, we got this a lot!

Baking Eve’s pudding brings back happy childhood memories. Growing up we had a huge fruit and vegetable garden with two large apple trees growing within it.

I have my friend to thank for this recipe. She went on for months to make her an Eve’s pudding.

I had not cooked this dish for years so was determined it had to be my Mum’s old recipe. My Mum made the best Eve’s pudding I’ve ever eaten.

A proper old fashioned pudding from my childhood. Given the abundance of apple trees in our garden, we ate this a lot! I add ground cinnamon to the apples, although this is not traditional.

The apples are topped with sponge batter which when baked forms a thick dome shaped crust! It is pudding heaven in a bowl.

My sister Judith has recently moved into a new house and there are two mature apple trees in her garden. One of the trees was full of deliciously sweet eating apples.

So armed with my Mum’s recipe and a bag of my sisters apples I set to making a few puddings. Turn’s out my kids love this pudding as much as I did as child.

I’ve made it weekly for the past month, including one for my friend who also loved it. As did her son who stole the crust from the top when she wasn’t looking.

As anyone who’s ever eaten Eve’s pudding will know, the crust is the best bit!

What apples can I use for Eve’s Pudding?

I like to use Granny Smith apples when I make this traditional Eve’s pudding as they are nice a tart, crisp apple and they keep their shape when cooked.

However, other dessert firm apples like a Pink Lady would also work. Traditionally my Mum would have used Bramley cooking apples, as that is what we had growing in our garden.

However, cooking apples tend to be very sour so you may find you need to add a little sugar to the apples when you are cooking them.

Do I need to add cinnamon to the apples?

The simple answer is no, you don’t need to add cinnamon to the apples when you are cooking them. In fact a traditional recipe for Eve’s Pudding would leave them out entirely.

However, I love the marriage of cinnamon with apple, as do my family, so I like to add it. If you don’t want the flavour of cinnamon in the pudding, simply leave it out.

Why use Stork margarine instead of butter?

For almost everything I cook or bake, I use butter in place of margarine. However, there is one exception and that is when it comes to sponge cake.

Whether we are talking about a Victoria Sponge or the sponge topping on this Eve’s pudding, I use Stork margarine.

I won’t even try and explain the science behind it as I simply don’t know. However, I’ve experimented with both and can confirm that Stork margarine produces a lighter sponge cake with a far better rise, than butter.

Can I make this pudding ahead of time?

Eve’s pudding can be made ahead of time and heated up when you are ready to serve. However, I love nothing better than serving it hot from the oven, when the crust is at it’s best and the sponge topping is warm and fluffy.

So instead what I tend to do is cook the apples before hand, place them in the dish and cover.

I then weigh out the dry ingredients for the sponge topping and rub into breadcrumbs. Ready to add the wet ingredients and mix to a batter just before I am ready to pop into the oven to bake and enjoy.

If you like this recipe then try some of our other great bakes:

These are all great traditional puddings that you can enjoy with cream, ice cream or warm custard. 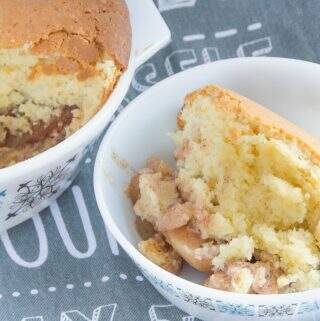