Cinnamon rolls, fresh from the oven will not only make your house smell amazing they will have everyone waiting to grab them as the smell is intoxicating.

Warm cinnamon rolls, straight out of the oven, can you imagine anything better with a cup of tea or coffee? I’m not sure I can! There is something very moreish about a cinnamon roll, I don’t know anyone who doesn’t like them. I find the most difficult thing is stopping at only one! 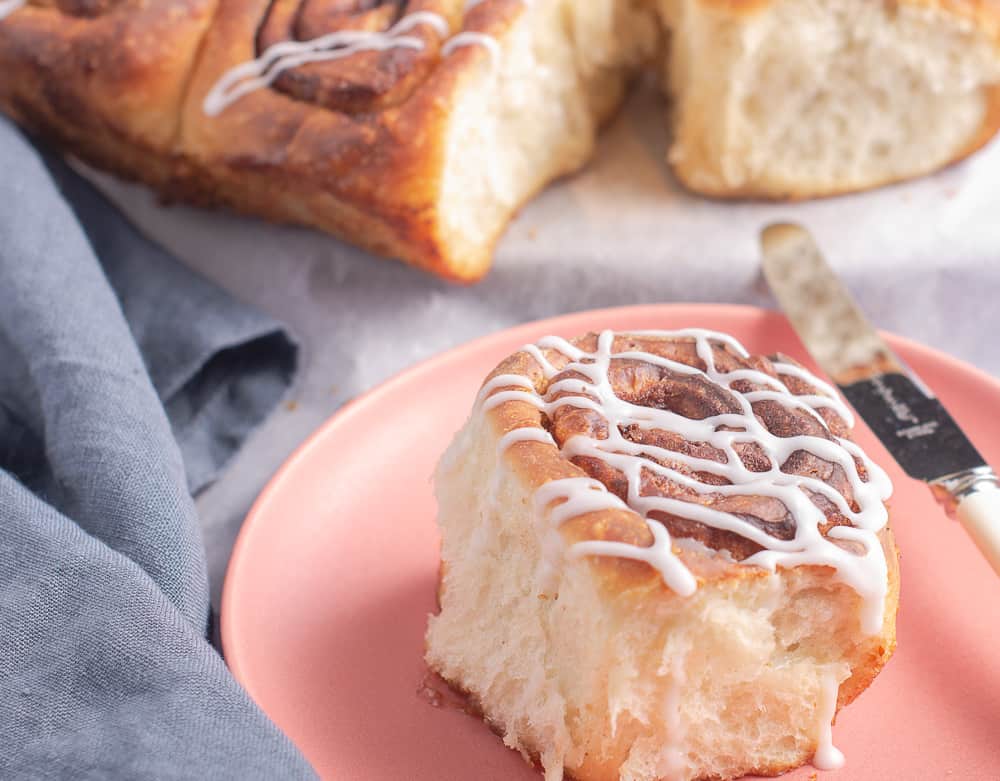 We use a brioche bread dough for our cinnamon buns, a dough that is enriched with both milk and butter. For that reason we have held back on the sugar in the dough, it is only slightly sweetened. Furthermore there is a lot of sugar in the cinnamon/sugar filling mix. Brioche dough tends to be quite sticky which is why we’ve used a stand mixer with a dough hook. However do not be tempted to add more flour as this is a wetter dough than a normal bread dough.

The first prove for this dough is roughly 60-90 minutes, during which time the dough should double in size. Once the dough has risen place it on a lightly floured surface and roll out to a rectangle before sprinkling on the cinnamon sugar.

Can I prepare these ahead of time?

Cinnamon rolls can be eaten any time of the day but they really do taste wonderful fresh for the oven. I think they make the perfect breakfast or brunch sweet treat. Simply prepare the rolls to stage 6 in the recipe card. Once the rolls have been cut and placed in the greased oven-proof dish, cover them and place them in the fridge overnight. The bread will prove overnight in the fridge. Next morning remove them from the fridge and allow them to come to temperature on the worktop for about 1 hour. Then simply bake them in the oven as per the recipe.

This is why they are great to serve at a weekend Brunch or indeed on Christmas morning. They can be prepared ahead of time, and then popped into the oven while you get on with other things. 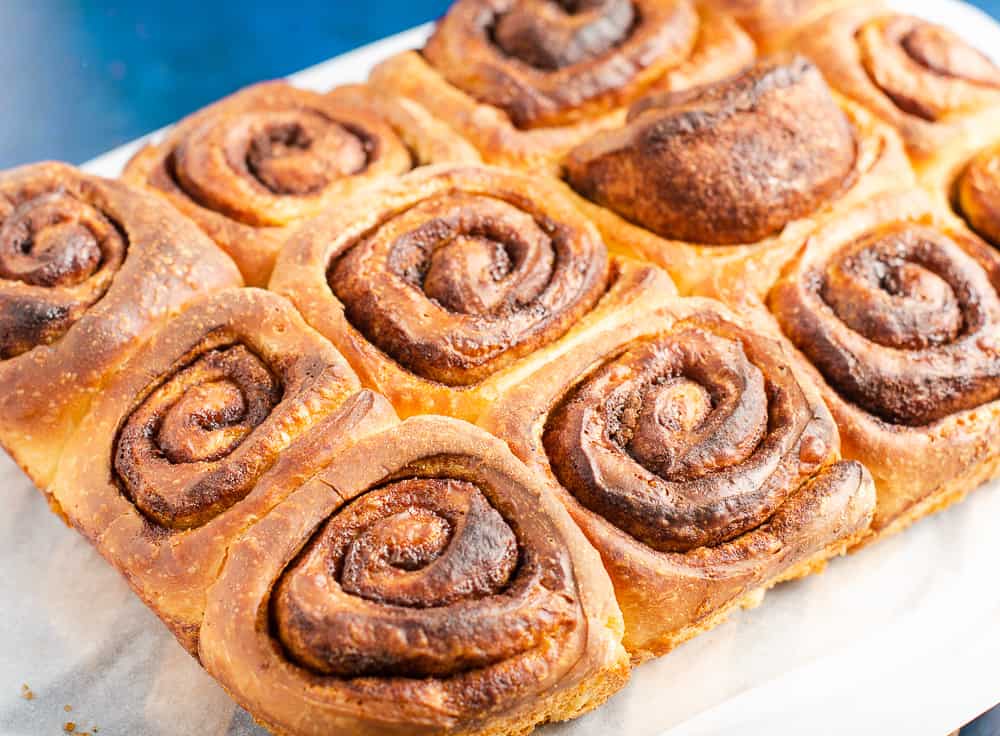 We both enjoy cinnamon rolls with cinnamon and nothing else. However you can easily add some dried fruits to the rolls, simply sprinkle over the dough after you’ve added the sugar and cinnamon.

This recipe adds a little orange drizzle icing to the rolls. We feel this adds a hint of orange without making the buns overly sweet. However you could easily swap the orange for lemon or even a little stem ginger syrup. Alternatively warm up some apricot jam and brush the jam over the warm rolls as soon as they come out of the oven. 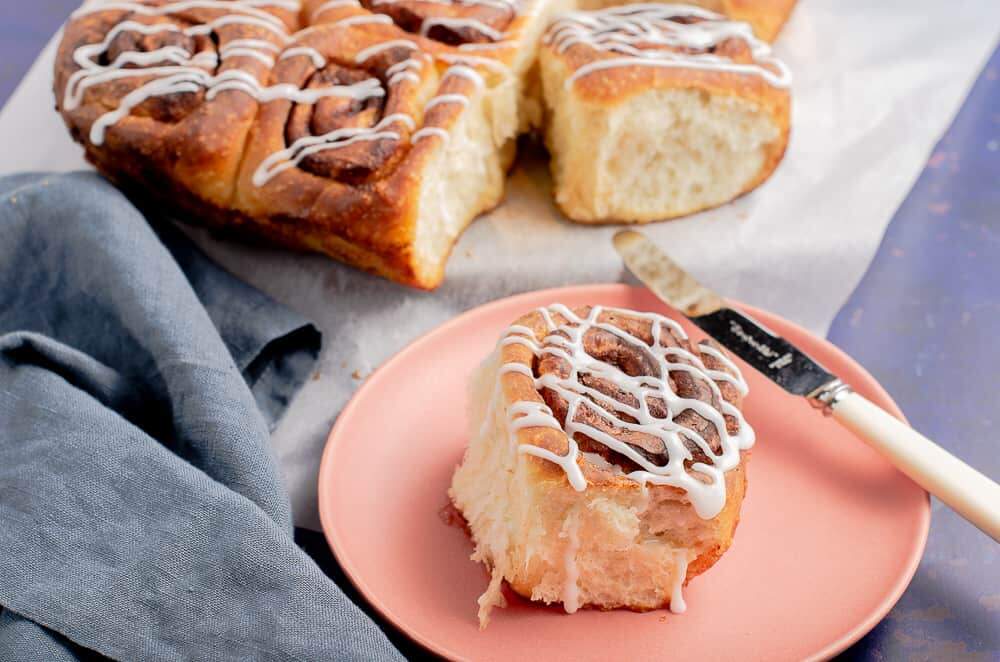 Other great recipes for the festive season include our Tourtiere Pork Pie our Panettone Bread & Butter Pudding, or our Leftover Turkey Pie. For other ways with brioche then our Brioche Rolls are perfect anytime of year but perfect for serving at a brunch get-together. Hosting your own brunch then take the stress out of it and head to our Ultimate Guide to Brunch. Here you’ll find all our brunch recipes together with some great advice on how to get started. 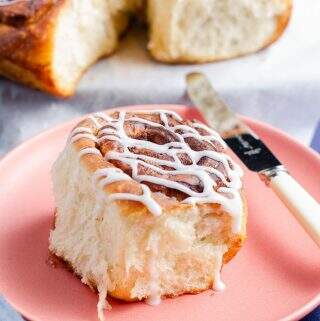 Cinnamon rolls, fresh from the oven will not only make your house smell amazing they will have everyone waiting to grab them as the smell is intoxicating.
5 from 3 votes
Print Pin SaveSaved!
Prevent your screen from going dark
Prep Time: 25 mins
Cook Time: 25 mins
Proving Time: 1 hr 30 mins
Total Time: 2 hrs 20 mins
Servings: 12 portions
Calories: 286kcal
Author: Michelle Rolfe