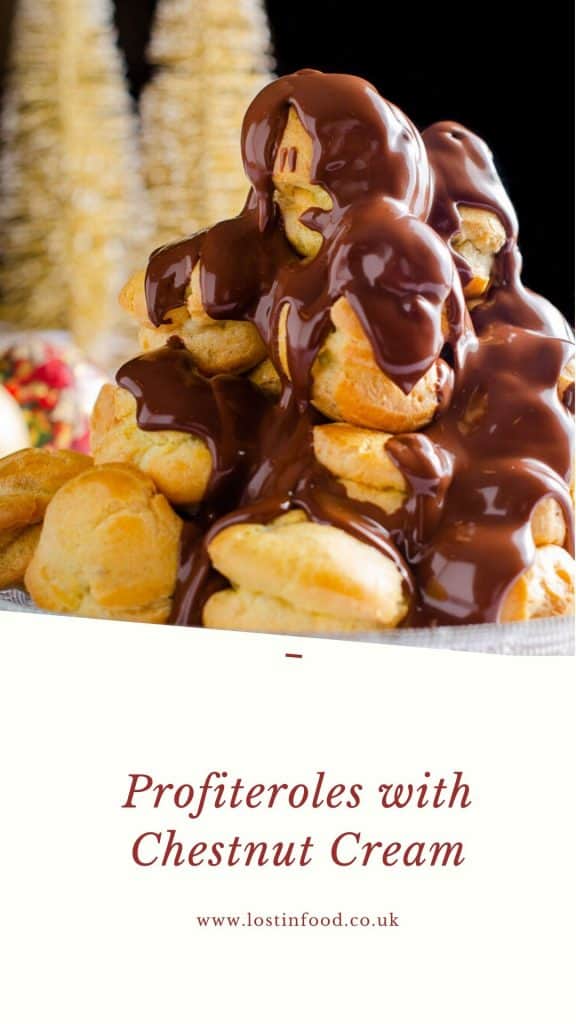 Chocolate profiteroles filled with chestnut cream and drizzled with melted chocolate, dessert perfection on a plate. Pile them high and let your guests tuck in!

Chocolate profiteroles are a dessert that never fail to put a smile on peoples faces. Round choux buns filled with cream and topped with chocolate.

For a seasonal twist we’ve filled our chocolate profiteroles with creme patisserie that’s been flavoured with chestnut puree. Creme patisserie is a french term, but is is basically an egg and vanilla custard!

We served these delicious chestnut flavoured choux buns to guests at one of our festive afternoon teas and they went down a treat. Our chocolate profiteroles can be served as individual portions, or add 5 to a bowl for a weekend dessert for family.

However, they do make a great addition to a buffet table at a New Year’s drinks party. Pile them high and let guests help themselves, just be sure you have plenty to go around as they are incredibly moreish.

How to make chocolate sauce for profiteroles?

How does choux pastry differ from shortcrust?

Choux pastry is a cooked pastry rather than one that is rubbed together and chilled like shortcrust.

Once you’ve mastered the art of making the choux dough, it’s a remarkably versatile pastry.

Instead of piping into balls as we’ve done here, you can pipe long tubes of pastry and make chocolate eclairs instead.

Why do profiteroles sometimes collapse once baked?

Top tip! When you take the baked profiteroles out of the oven, pierce a small hole in the bottom of the choux ball with a sharp knife or skewer. This allows the steam inside the choux bun to release, stopping it from becoming soggy and collapsing.

Can chocolate profiteroles be made in advance?

The choux buns can be made ahead of time and stored in an airtight container for 2 days prior to serving them.

The creme patisserie can also be made ahead of time, allowed to cool and stored in the fridge. Just ensure that you cover the top of the custard with some cling film to stop a skin forming on top.

However, creme patisserie does not freeze well!

Can I freeze profiteroles?

You can also freeze the profiteroles, once baked, by allowing to them to cool and then freeze them individually.

When ready to eat, remove from the freezer and allow them to defrost on a wire rack.

Top tip! We recommend popping them into a warm oven for 10 minutes to crisp them up again before filling!

What alternative profiterole fillings can be used?

We have filled the choux buns with a chestnut creme patisserie and drizzled them with chocolate.

Other flavours can easily be added to the custard filling. For example, add some cold strong coffee to the mixture, this flavour works really well with the chocolate drizzle.

However, you could easily fill with the buns with a simple whipped double cream, either on it’s own or flavoured with macerated berries like strawberries or raspberries.

Remember that the choux buns are only a pastry so can work with both sweet and savoury fillings!

If you don’t fancy sweet then why not try a savoury twist to these choux buns:

The list is endless, it is after all a simple pastry to carry the flavour of the filling. So why not get experimental?

If you like this recipe try some of our other great desserts: 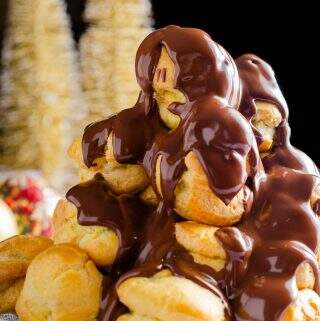 This recipe has been shared to CookBlogShare, click on the link for other recipe ideas.