Fennel gratin makes a delicious side, mixing fennel with potato, leek and garlic. A change on the Sunday lunch table alongside a lovely roast.

Fennel gratin is a lovely side dish and one that’s very simple to make. Fennel is a vegetable that many people have an aversion to, due to it’s liquorice like aroma. However when eaten the taste is far more subtle anise and cooking the fennel leaves it silky soft. During the warm Summer months I like to eat fennel raw in a salad or slaw, where they crunch of this vegetable works perfectly. However as we head into Autumn and the weather becoming a lot cooler, fennel gratin is what I want to eat.

This gratin works really well served alongside chicken, pork or fish. However this dish is rich with cream and cheese, so I would recommend cooking meat or fish quite simply. A roast chicken or some pan fried fish would work beautifully. If you want to cut down on the cream, you could replace the cream with a little milk instead.

If you like this recipe then try our Fennel & Apple Slaw, our Mustard Mash Potato, our Warm Vegan Potato Salad or our Boulangerie Potatoes, all great side dishes. 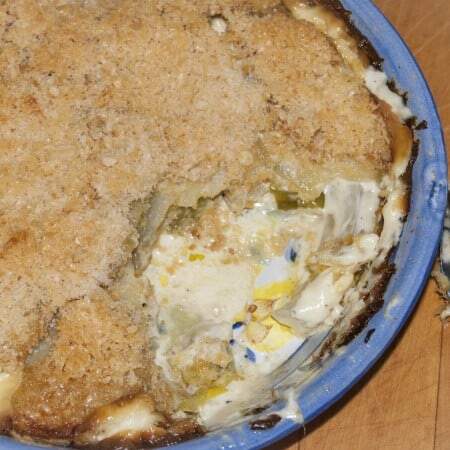 This basic gratin recipe is easily adapted for other vegetables, whatever you might have to hand. Onions can be used in place of leeks if preferred.If you want to cut back on the the cream, simply substitute half the cream for milk.We like to serve this dish with fish, chicken or pork, all of which go very well with the aniseed flavour provided by the fennel. Due to the rich gratin sauce we would recommend cooking your meat or fish simply.
Nutrition Facts
Fennel Gratin
Amount Per Serving
Calories 324 Calories from Fat 189
% Daily Value*
Fat 21g32%
Saturated Fat 13g81%
Cholesterol 68mg23%
Sodium 282mg12%
Potassium 834mg24%
Carbohydrates 27g9%
Fiber 6g25%
Sugar 1g1%
Protein 8g16%
Vitamin A 1102IU22%
Vitamin C 24mg29%
Calcium 196mg20%
Iron 5mg28%
* Percent Daily Values are based on a 2000 calorie diet.